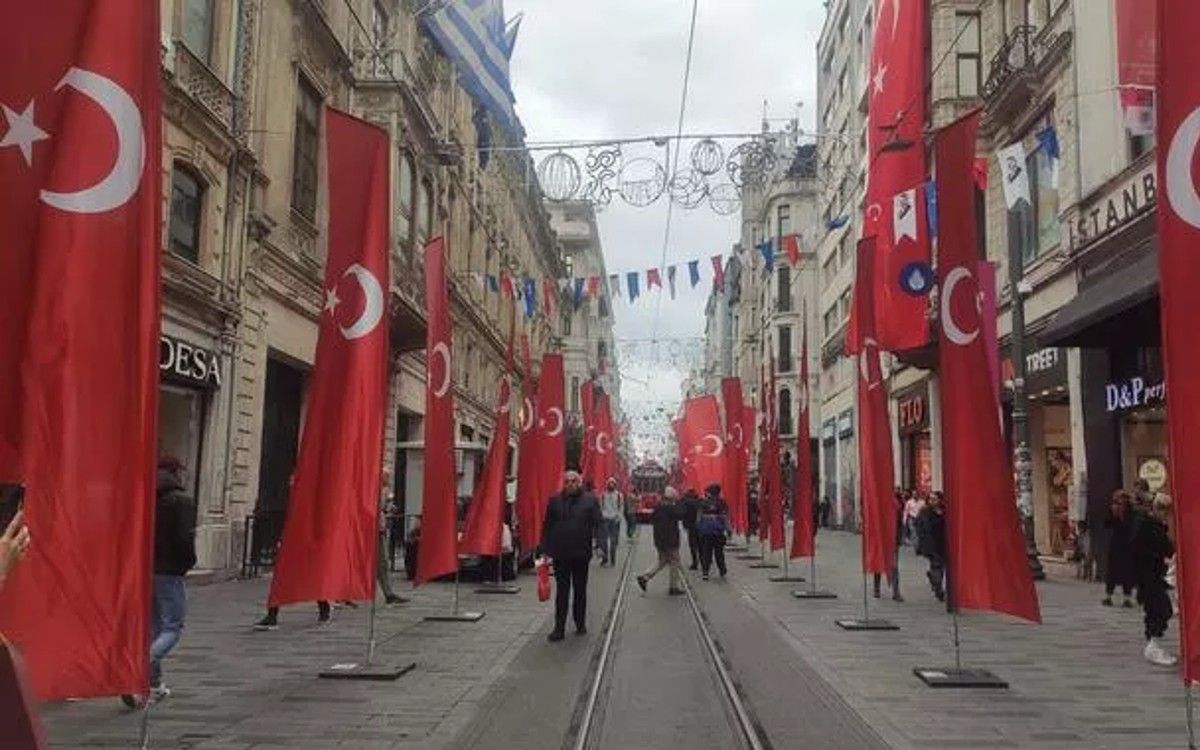 According to Istanbul Governor Ali Yerlikaya, the blast in the Beyoglu district occurred around 4.20 p.m. local time (1320GMT), with police and emergency officials cordoning off the scene immediately.

“It smells like terrorism,” Turkish President Recep Tayyip Erdogan told a news conference before leaving for a G20 summit in Bali, Indonesia.

Later visiting the blast site, Vice President Fuat Oktay said it was considered a terrorist attack carried out by a female attacker, who has now been arrested.

Communications Director Fahrettin Altun said, “terror attacks against our civilians are direct and indirect consequences of some countries’ support for terror groups.”

“I have learned with deep anguish about the explosion at Istiklal Avenue in the heart of Istanbul,” Pakistan’s Prime Minister Shehbaz Sharif said on Twitter.

“(The) government and the people of Pakistan express deepest condolences to the brotherly people of Türkiye at the loss of precious lives and send prayers for the speedy recovery of the injured,” he added.

Azerbaijan’s President Ilham Aliyev said in a statement that Baku is “deeply shocked” by the news, adding: “I extend my deep condolences to you, families and loved ones of those who were killed, and the brotherly people of Türkiye, and wish the injured recovery.”

Swedish Prime Minister Ulf Kristersson was “deeply shocked by the news of today’s explosion in the heart of Istanbul.”

“Our thoughts are with the victims, and with all those who have lost their loved ones. We stand with Türkiye,” he said on Twitter.

Russia’s President Vladimir Putin also sent a condolence message to Erdogan, conveying his “deepest” condolences and “sincere sympathy and support” to the families of the victims, as well as wishes for a speedy recovery to all the wounded.

“We reaffirm our readiness for the closest cooperation with our Turkish partners in the fight against all forms and manifestations of terrorism,” Putin said.

For his part, Ukrainian President Volodymyr Zelenskyy tweeted that he is “deeply saddened” by the news and extended condolences to the victims and wished a speedy recovery to the injured.

“The pain of the friendly Turkish people is our pain,” Zelenskyy added.

Serbian President Aleksandar Vucic said the incident shook not only the residents of Istanbul but the entire world.

French President Emmanuel Macron said the Turkish people were struck in their hearts, by Istanbul.

“On this day so symbolic for our nation, while we think of the victims who fell on November 13, 2015, the Turkish people are struck by an attack in their heart, Istanbul. To the Turks: we share your pain. We stand with you in the fight against terrorism,” Macron tweeted.

NATO Secretary General Jens Stoltenberg said: “Shocking images from Istanbul. My thoughts and deepest condolences to all those affected & to the Turkish people. #NATO stands in solidarity with our Ally Türkiye.”

The Gulf Cooperation Council and the President of Bosnia and Herzegovina’s Republika Srpska entity, Milorad Dodik, also condemned the attack.

Burundi’s President Evariste Ndayishimiye denounced what he referred to as a “horrific terrorist attack.”

“I wish to convey my heartfelt condolences to President Erdogan and the Turkish people at this tragic moment. We must reignite our common efforts in the fight against terrorism,” said Ndayishimiye.

Somali President Hassan Sheikh Mohamud while condemning the attack said: “Our thoughts and prayers are with the victims, the Turkish people, and the government. Türkiye is a valuable ally in Somalia’s security and development journey.”

“Somalia grieves with you as we pray for all who were affected. Terrorism, in all its forms, will be defeated,” he said.

The Congolese president’s office said President Felix Tshisekedi learned with dismay of the deadly attack and reiterated his commitment in the fight against terrorism alongside Türkiye.

Tshisekedi expressed his support to President Erdogan, the Turkish people, and the relatives of the victims.

Kazakh President Kassym-Jomart Tokayev sent a condolence message to Erdogan, saying: “I sincerely share the grief of our fellow Turkish citizens in such a difficult moment. I express my condolences to you and the families who lost their loved ones on behalf of the people of Kazakhstan and myself.”

President of the Dominican Republic, Luis Abinader, also condemned the attack, tweeting: “Our solidarity with the victims and their families.”

Armenian Foreign Minister Ararat Mirzoyan, in a Twitter post, expressed his “sincere condolences” to the families of victims of the deadly explosion and wished a speedy recovery to the injured.

“Shocking images out of Istanbul. My prayers go to those affected and to the Turkish people,” Ilhan Kyuchyuk, a Renew Europe group member of the European Parliament, said on Twitter.

“Europe stands with you in these difficult times… There can be no excuse for such acts aimed against peaceful citizens,” Kyuchyuk said.

“I wish to express my personal solidarity and mourning to the Türkiye authorities and its citizens. Our thoughts and prayers are with you,” Rau said on Twitter.

“The terrible explosion in Taksim square has filled us with sorrow,” Panama’s Foreign Minister Janaina Tewaney Mencomo said on Twitter, extending condolences to the people and government of Türkiye.

“The news from Istanbul today is shocking and tragic. My condolences and my solidarity to the family and friends of the victims, and to the Turkish people and authorities,” Portugal’s Foreign Minister Joao Cravinho said on Twitter.